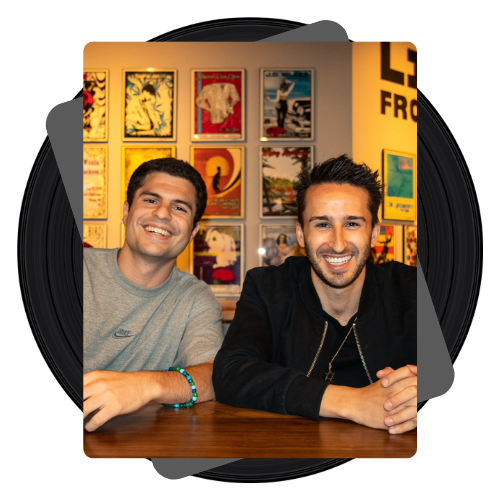 How It All Got Started

The forces of collision that helped make UpDating a phenomenon are stories & tales a documentary wouldn’t even do justice. As the fables go, the yin & yang of Brandon & Harrison meeting & eventually collaborating to create UpDating were straight from a movie.

While living in San Francisco working in tech, Harrison, an avid creator, self-deprecating fellow, and a single man naturally did what most 25 year old single dudes do, they start a hilarious blog about their dating life. Whether it was his great debates on the proper emojis to use after a solid first date or questioning one’s drink choice on a first date, his writing started to catch on by a few local outlets. As video was becoming popular in the digital space, he turned his attention to producing short form shows that would be relatable and raw unlike most generic content by the popular media sites at the time. One of his shows, a livestreamed first date where he reported before, during (yes, from the bathroom), and after the first date on a stream took off with thousands of comments & shares within hours. What struck Harrison most was how ready audiences were for authentic & unfiltered storytelling on dating ditching the previous self-help era of years prior. While his own dating life fizzled into a relationship (though single again now), he knew this had the seeds of a massive show & dating was the right hook, but the mechanism of just living on social media was too crowded. There had to be another way.

Flash to Brandon Berman, at the time, a rising standup comedian in New York, felt more at home bringing his brand of humor & comedy in the reality space, finding joy & laughter in the uncomfortable moments of everyday life.  With an original passion for radio following an internship at The Howard Stern Show, Brandon always knew he had the skills & talent to host a next-level thrilling & entertaining show breaking ground with addictive entertainment. The son of a TV critic, he had been obsessed with storytelling at a young age, bringing voyeuristic approaches to fun content in gyms capturing some of the quirky goofballs in his home town of Wantagh, Long Island. One day, Brandon was at a diner with his ex-girlfriend overhearing a first date conversation (apparently, there was an argument over the burger order) and he began commentating on this & roasting them to his ex-girlfriend. She could not stop laughing and the light bulbs went off that there was a connection here with the videos & formats Harrison had been developing on social media. One phone call to Harrison later, the early seeds of UpDating were formed, a live dating reality show where a couple would go on a blind date in front of an audience (the blindfolds becoming a huge part of the show would happen much later).
‍
One sold out 25-person show in a basement of a Tribeca taqueria later and both creators knew they were onto something big. Not only could the audience not stop laughing but this form of rawness, imperfection, and satire had never been attempted before in front of a packed audience. Their journey would begin from here with tails of ordering chairs for venues without them to hold their shows all over New York City up until the 2020 pandemic. With the world turning online & TikTok becoming a new pheonomenon, the fellas began strategizing a way to distribute their content in bites & gripping cliffhanger segments online when the world reopened. The world did finally reopen and UpDating took off towards the end of 2021 and into 2022. With a growing fan base now all over the world, UpDating is poised to become the edgiest, funniest, and most thrilling show for the next generation. When we started the show in 2018, we believed the rawness of awkward dates mixed with the honest humor we love would create a one-of-a-kind relatable, charming, and wildly entertaining show for all audiences.

The show starts with a simple premise: casting two singles together for a blindfolded date in front of a live audience. What follows is an unforgettable thrill ride with raw reveals, uncomfortable moments, and authentic commentary on dating in real-time with real people, led by our host and & disarming conductor, Brandon Berman.

While no two shows are alike, UpDating is always heavily interactive. You can break the 4th wall by joining the stage from the audience through our co-host & energetic producer, Harrison Forman. Single, attached, or on a first date yourself, UpDating's tour dates are always listed on our site, so snag a ticket before they sell out (or just patiently scroll our other favorite stage, TikTok).

We invite you to join us on our journey to take ourselves (and dating) a lot less seriously. For more information on touring, casting, community events, or hot takes on each episode, our Instagram DM's are always open, or you can subscribe to our newsletter below.

Thank you! Your submission has been received!
Oops! Something went wrong while submitting the form.